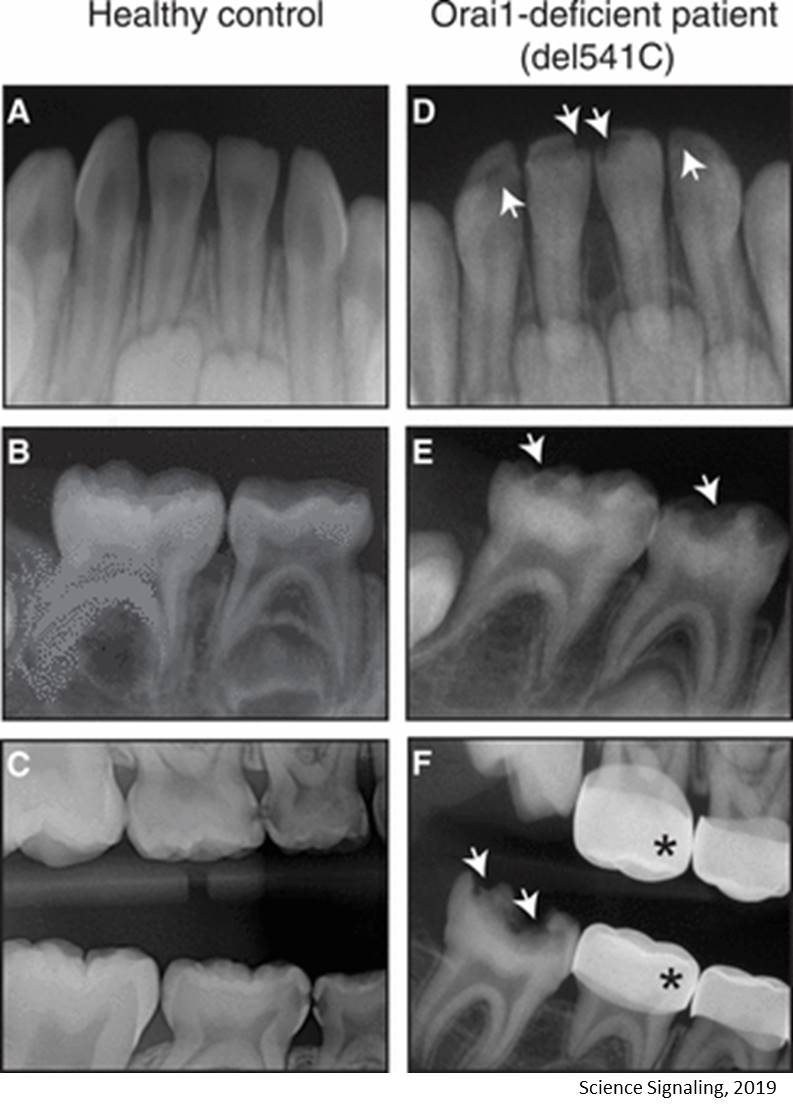 A mutation in the ORAI1 gene--studied in a human patient and mice--leads to a loss of calcium in enamel cells and results in defective dental enamel mineralization, finds a study led by researchers. The study, published in Science Signaling, identifies ORAI1 as the dominant protein for calcium influx and reveals the mechanisms by which calcium influx affects enamel cell function and the formation of tooth enamel.

Calcium is critical for many cellular functions, including mineralizing teeth and bones. Calcium enters cells via ORAI proteins, which form pores in a cell's plasma membrane to enable calcium influx when activated.

"Our previous research has shown that deficiencies in the modulation of calcium influx or calcium transport result in dental enamel malformation," said the study's senior author. "Despite this knowledge, the biology of enamel cells as it relates to the role of calcium signaling remains poorly understood."

Studies show that several genes, including ORAI (which encode ORAI proteins), are involved in the formation of tooth enamel. Enamel--the hard, outer layer of teeth--first forms as a soft, gel-like matrix. ORAI proteins then help the enamel-forming cells to mineralize.

Mutations in the human ORAI1 gene result in immune dysfunction and immune diseases, but people with ORAI1 mutations also have defects in their tooth enamel. In this study, the researchers investigated the case of a patient with a complex medical history, including combined immunodeficiency and a mutation in the ORAI1 gene. Throughout his childhood, the patient had defects on his tooth enamel, resulting in severe cavities and related dental abscesses. Based on his clinical presentation, the researchers concluded that the ORAI1 mutation likely accounted for the defective enamel mineralization.

Given the lack of dental samples from patients with ORAI1 mutations, the authors then developed mouse models to study the role of ORAI proteins in enamel formation, both by observing tooth enamel and examining its influence on the environment inside enamel cells.

The researchers studied the ORAI family of proteins (ORAI1, ORAI2, and ORAI3) and genetic mutations in the corresponding genes to investigate the mechanism by which calcium is modulated by each of these proteins. When mice had a mutation in the ORAI1 gene and were therefore deficient in ORAI1 protein, calcium entry into enamel cells was significantly reduced (by roughly 50 percent), and tooth enamel was abnormal, including cracks in the outer enamel layer. By contrast, mice with ORAI2 mutations and ORAI3 deficiency showed an increase in calcium by approximately 30 percent in the enamel cells, which did not result in obvious enamel defects. This suggests that ORAI1 is the dominant channel for modulating the influx of calcium into enamel cells.

To better understand how calcium influx--and conversely, deficiency in calcium--changes the functioning of enamel cells, the researchers examined the activity of cells lacking ORAI1. They found that calcium dysregulation in ORAI1-deficient cells affects their function at multiple levels, including increased mitochondrial respiration and subsequent changes in redox balance. An elevation in reactive oxygen species can be detrimental to cells, and to protect proteins in an intracellular environment that is more oxidizing, a mechanism called S-glutathionylation is promoted.

The findings provide a foundational understanding of what happens in enamel cells, which could help create a pathway for researchers interested in regenerating tooth enamel or developing therapies to treat patients with enamel defects.

"We've long observed deficiencies in tooth enamel associated with abnormal calcium levels in the enamel cells, but can now detail a mechanism for how this occurs," said the senior author.

Mechanism that helps to keep bacteria in the gut