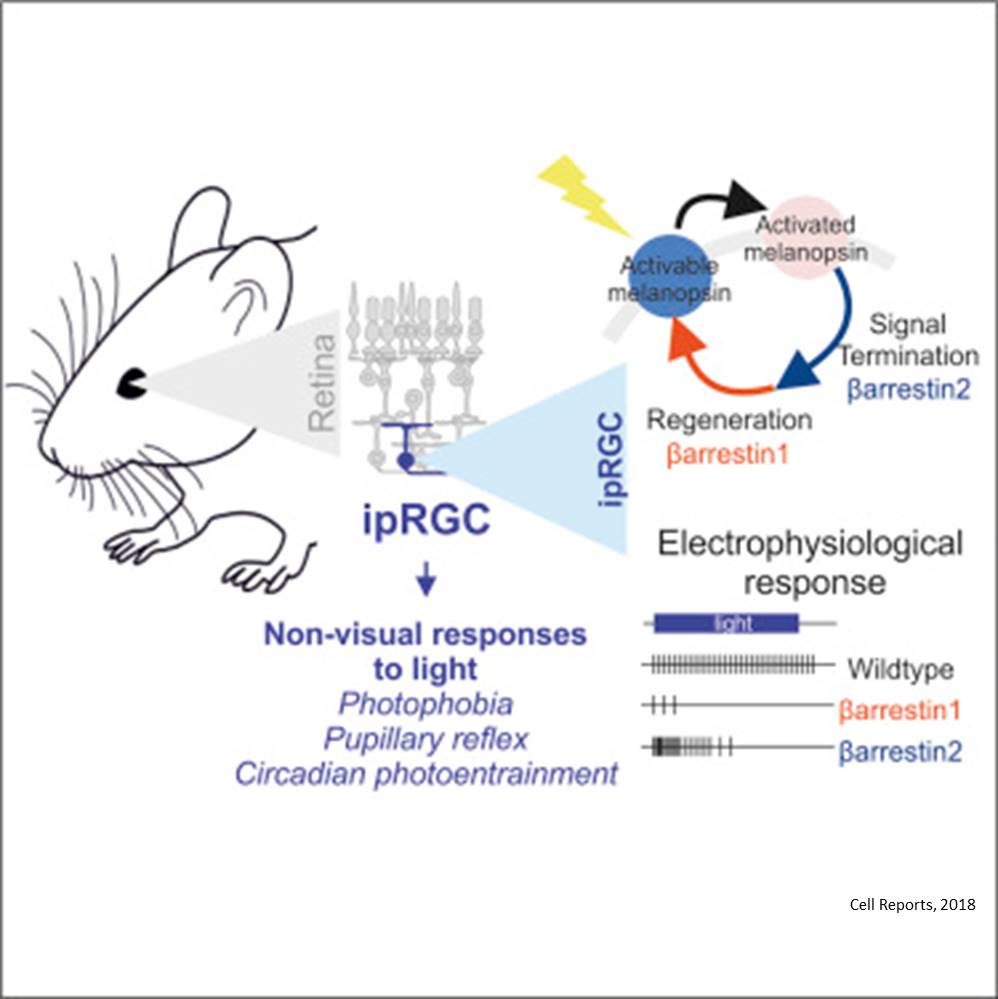 For most, the time spent staring at screens--on computers, phones, iPads--constitutes many hours and can often disrupt sleep. Now, researchers have pinpointed how certain cells in the eye process ambient light and reset our internal clocks, the daily cycles of physiological processes known as the circadian rhythm. When these cells are exposed to artificial light late into the night, our internal clocks can get confused, resulting in a host of health issues.

The results, published in Cell Reports, may help lead to new treatments for migraines, insomnia, jet lag and circadian rhythm disorders, which have been tied to cognitive dysfunction, cancer, obesity, insulin resistance, metabolic syndrome and more.

"We are continuously exposed to artificial light, whether from screen time, spending the day indoors or staying awake late at night," says the senior author of the study. "This lifestyle causes disruptions to our circadian rhythms and has deleterious consequences on health."

The backs of our eyes contain a sensory membrane called the retina, whose innermost layer contains a tiny subpopulation of light-sensitive cells that operate like pixels in a digital camera. When these cells are exposed to ongoing light, a protein called melanopsin continually regenerates within them, signaling levels of ambient light directly to the brain to regulate consciousness, sleep and alertness. Melanopsin plays a pivotal role in synchronizing our internal clock after 10 minutes of illumination and, under bright light, suppresses the hormone melatonin, responsible for regulating sleep.

"Compared to other light-sensing cells in the eye, melanopsin cells respond as long as the light lasts, or even a few seconds longer," says first author of the paper. "That's critical, because our circadian clocks are designed to respond only to prolonged illumination."

In the new work, the researchers used molecular tools to turn on production of melanopsin in retinal cells in mice. They discovered that some of these cells have the ability to sustain light responses when exposed to repeated long pulses of light, while others become desensitized.

Conventional wisdom has held that proteins called arrestins, which stop the activity of certain receptors, should halt cells' photosensitive response within seconds of lights coming on. The researchers were surprised to find that arrestins are in fact necessary for melanopsin to continue responding to prolonged illumination.

In mice lacking either version of the arrestin protein (beta arrestin 1 and beta arrestin 2), the melanopsin-producing retinal cells failed to sustain their sensitivity to light under prolonged illumination. The reason, it turns out, is that arrestin helps melanopsin regenerate in the retinal cells.

"Our study suggests the two arrestins accomplish regeneration of melanopsin in a peculiar way," the senior author  says. "One arrestin does its conventional job of arresting the response, and the other helps the melanopsin protein reload its retinal light-sensing co-factor. When these two steps are done in quick succession, the cell appears to respond continuously to light."

By better understanding the interactions of melanopsin in the body and how the eyes react to light, the researchers hope to find new targets to counter skewed circadian rhythms due to, for example, artificial illumination. Previously, the research team discovered that chemicals called opsinamides could block melanopsin's activity in mice without affecting their vision, offering a potential therapeutic avenue to address hypersensitivity to light experienced by migraine sufferers. Next, the researchers aim to find ways to influence melanopsin to reset the internal clocks and help with insomnia. Another type of small RNA found to depend on personal attributes

The role of 'purinosomes' in the proliferation of cancer cells