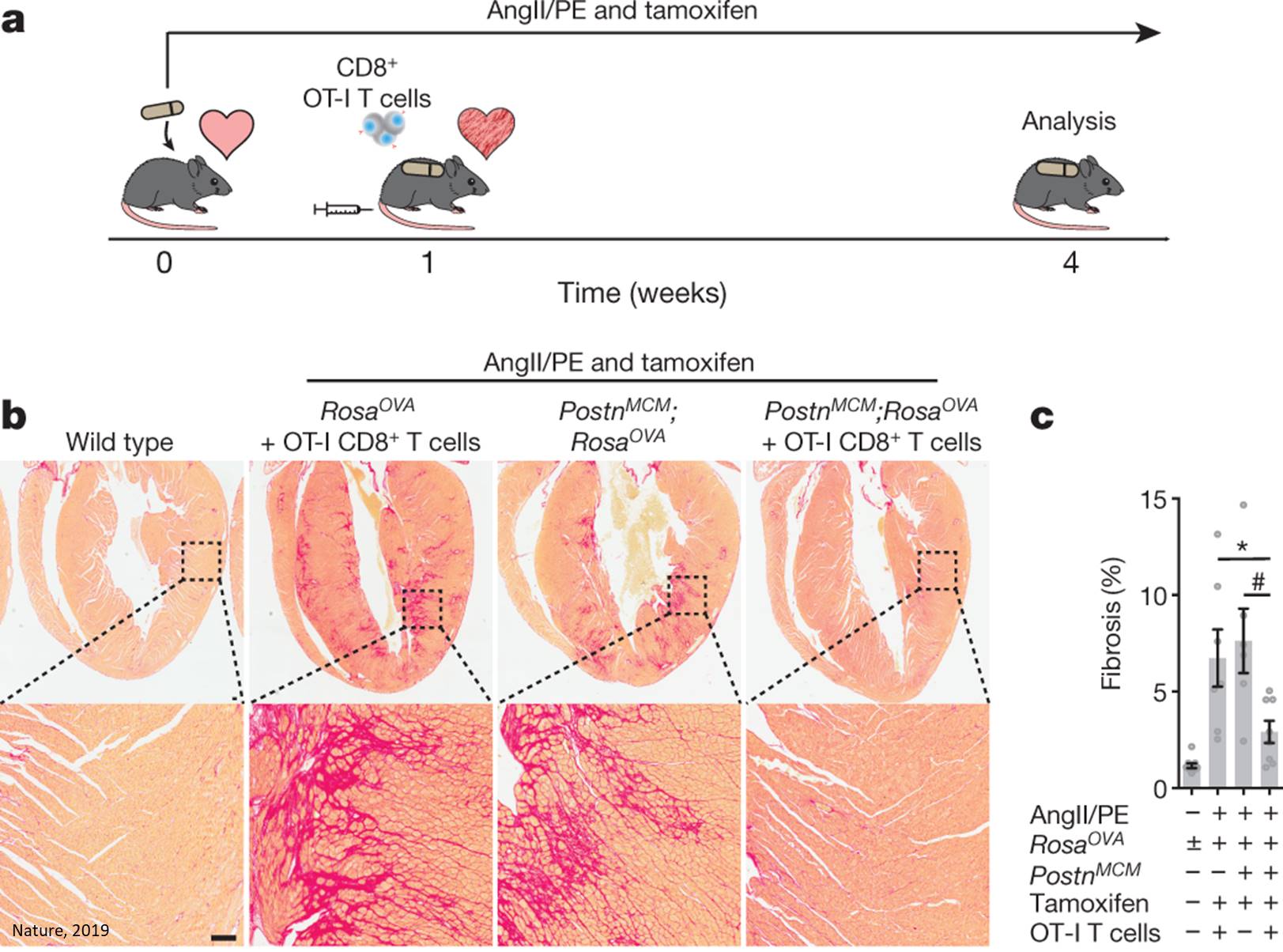 CAR T-cell therapy, a rapidly emerging form of immunotherapy using patients' own cells to treat certain types of cancers, may be a viable treatment option for another life-threatening condition: heart disease. In a first-of-its-kind study, published in Nature, researchers used genetically modified T cells to target and remove activated fibroblasts that contribute to the development of cardiac fibrosis--a scarring process found in most forms of heart disease that results in heart stiffness and decreased function of the heart. The team found the approach significantly reduced cardiac fibrosis and restored heart function in mice with heart disease caused by high blood pressure.

"The ability to harness patients' own cells to fight cancer has been one of the most promising research breakthroughs of the past decade, and we are excited to find ways to leverage this same type of technology to address other common illnesses," said the study's corresponding author. "While much more research is needed before we can introduce this approach into the clinical setting, this marks a significant step forward in our efforts to treat - and potentially reverse - a condition that accelerates the progression of heart failure."

Heart disease is the leading cause of death in the United States, and excessive cardiac fibrosis is an important factor in the progression of many forms of heart disease. It develops after chronic inflammation or cardiac injury, when cardiac fibroblasts - cells that play an important role in the structure of the myocardium, the muscular middle layer of the heart's wall - become activated and begin to remodel the myocardium via extracellular matrix deposition. Research has shown that the removal of activated cardiac fibroblasts can reduce heart stiffness, making it easier for the ventricles to relax. However, there are no therapies that directly target excessive fibrosis, and very few interventions have shown the ability to improve heart function and outcomes among patients with impaired cardiac compliance.

CAR T-cell therapy, which involves genetically modifying a patient's own T cells to fight disease, is primarily used to treat blood cancers, including types of lymphoma and leukemia. The researchers sought to determine the viability of using the CAR T-cell approach to target and attack the activated cardiac fibroblasts that contribute to fibrosis.

As a first step, researchers launched a genetic proof-of-concept experiment using mice that can express an artificial antigen (OVA) on cardiac fibroblasts. The mice were treated with agents to model hypertensive heart disease, a condition associated with left ventricular hypertrophy (enlargement or thickening of the heart walls), systolic and diastolic dysfunction (pumping of blood in and out of the heart), and widespread cardiac fibrosis.

To selectively target the OVA proteins expressing cardiac fibroblasts, the team treated one cohort of mice with engineered CD8+ T cells that express a cognate T-cell receptor against the OVA peptide. At the four-week mark, the mice who were treated with the reengineered cells had significantly less cardiac fibrosis, whereas the mice in the control groups still had widespread fibrosis.

After establishing the feasibility of this approach, researchers sought to identify a protein specifically expressed by activated fibroblasts that they could program the genetically modified T cells to recognize and attack. Using an RNA sequence database, the team analyzed gene expression data of patients with heart disease and identified the target: fibroblast activation protein (FAP), a cell surface glycoprotein.

Researchers then transferred engineered FAP CAR T-cells into mice at the one and two week marks, aiming to target and deplete FAP-expressing cardiac fibroblasts. Within a month, researchers saw a significant reduction of cardiac fibrosis in the mice that were treated with the engineered cells, as well as improvements in diastolic and systolic function.

Researchers note additional studies are needed to confirm FAP as the optimal target and to ensure safety risks are minimized.

"We've seen enormous progress in the treatment of certain cancers via the use of engineered T cells. Our findings suggest that this approach may extend beyond cancer and serve as an effective treatment for heart disease," said the first author.