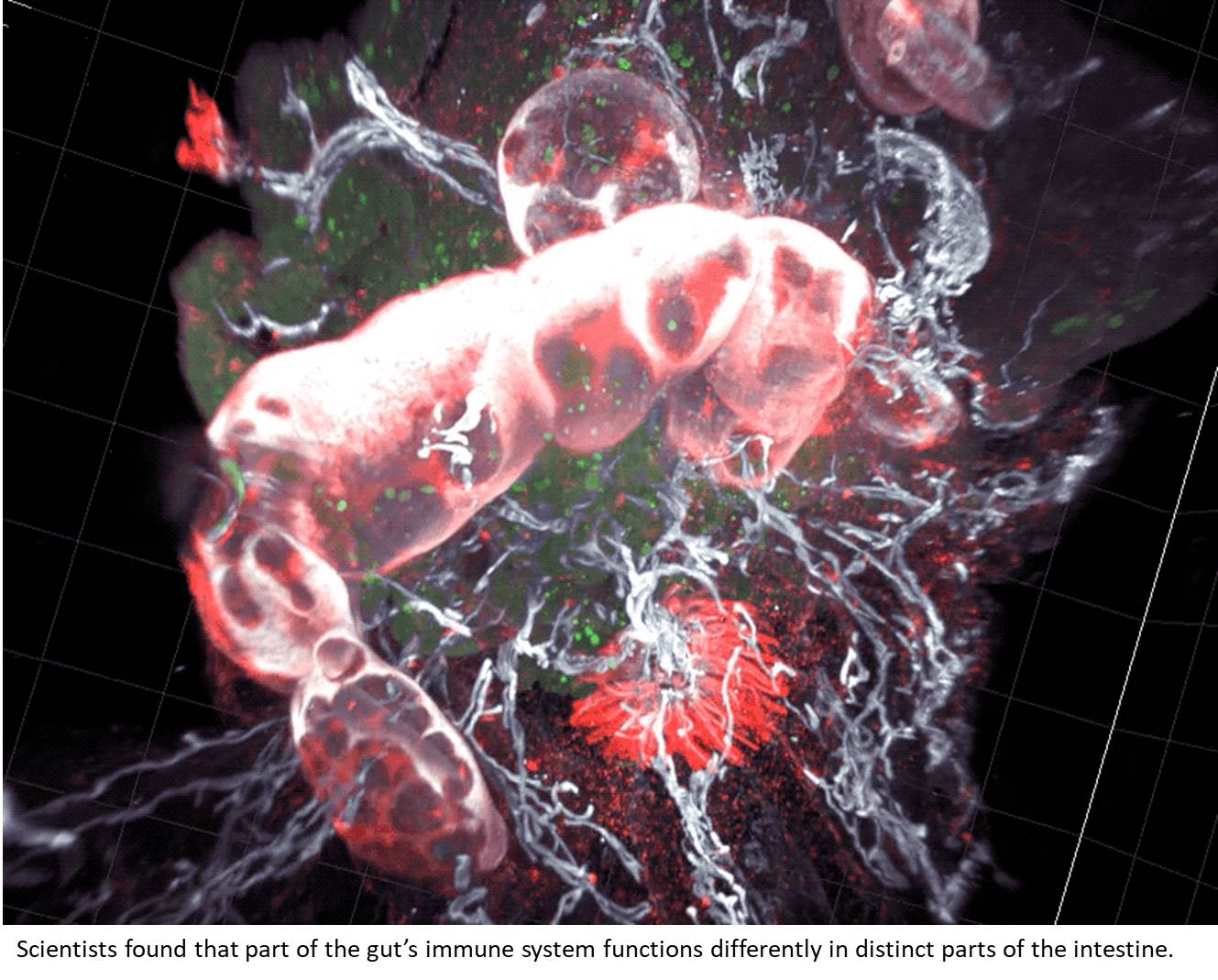 As food enters the intestine, it embarks on windy, lengthy journey. For most of the route, its surroundings don't appear to change much. But new research shows that the food-processing canal consists of compartments that pace the immune system's reactions to the food passing through--with less aggressive defenses in the first segments where nutrients are absorbed, and more forceful responses at the end, where pathogens are eliminated.

The findings, published in Nature, provide new insights about how the intestine maximizes nutrient uptake while protecting the body from potentially dangerous invading microbes, two seemingly conflicting functions. The research has potential to improve drugs for gastrointestinal disorders, as well as inform the development of oral vaccines.

"At first glance the intestine appears uniform throughout," says the senior author. "But we've found a sophisticated functional system lurking beneath the surface, organized in segments to allow different immune system functions in different locations."

Researchers uncovered a functional segmentation in mice by examining intestinal structures called gut draining lymph nodes, which orchestrate immune responses. The researchers found that nodes in different part of the intestine had different cell composition, and when they challenged the mice with a pathogen such as Salmonella, they saw different immune responses between segments.

Having immune responses separated by location likely increases the chance that the immune system reacts appropriately to what's passing through, the senior author says. Once most nutrients have been absorbed, the system can focus more aggressively on eliminating pathogens without interfering with food uptake.

According to the senior author, the immunological differences between the gut segments could be exploited for a number of therapeutic purposes, including for treating gastrointestinal disorders. For example, by targeting immune-suppressing drugs to the segment where they'll have the most effect, it might be possible to dampen their side-effects. Additionally, outcomes of surgeries that remove part of the intestine could improve if variations between segments were taken into account.

The spectrum of immune responses along the intestine could also be used to make new and better oral vaccines. Thus far, scientists' efforts to design oral vaccines--attractive to many because of the absence of needles--have been stymied by the difficulty of generating a robust immune response (and unless the immune system mounts a strong enough reaction to the vaccine, it cannot create the molecular "memory" of the pathogen needed to prepare the body against recurring attacks). According to the senior author, the muted immune response at the beginning of the intestine might be part of the reason why oral vaccines tend to be less effective than injections.

"In theory, targeting the distant end of the intestine could be more efficient in inducing the immune response required," the senior author says. "If we harness the right region of the gut, we might see some vaccines work that have previously failed."