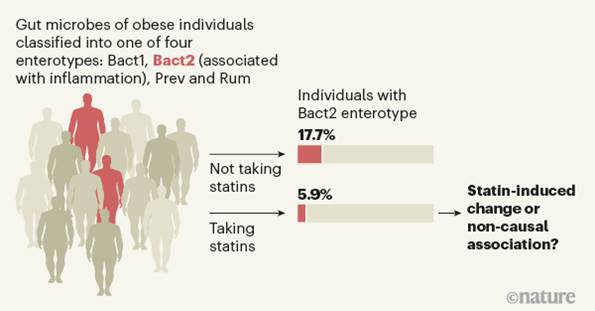 The research teams published their first findings in the journal Nature, identifying the common cholesterol-lowering drug statins as a potential microbiota-modulating therapeutic.

In their manuscript the authors explore gut bacteria in a Metacardis cohort subset comprising nearly 900 individuals from 3 different countries (France, Denmark and Germany) with BMI ranging between 18 and 73 kg.m-2. While the intestinal microbiota in obese individuals had previously been shown to differ from those in lean subjects, the researchers shed a whole new light on microbiota alterations associated with obesity.

'Recently the lab identified a single gut microbiota configuration (enterotype) with increased prevalence among patients suffering from intestinal inflammation (Inflammatory Bowel Disease), multiple sclerosis, and depression. They observed this disturbed enterotype to be characterized by low bacterial abundances and biodiversity, notably deficient in some anti-inflammatory bacteria such as Faecalibacterium. In fact, even among healthy individuals, they detected slightly higher inflammation levels in carriers of what they refer to as the Bacteroides2 (Bact2) enterotype. As obesity is known to result in increased systemic inflammation levels, they hypothesized that Bact2 would also be more prevalent among obese study participants.'

Exploring gut microbiota configurations of lean and obese volunteers, the MetaCardis researchers observed that Bact2 prevalence increased with BMI. While only 4% of lean and overweight subjects were characterized as Bact2 carriers, percentages sharply rose to 19% among obese volunteers. The same trend was observed among 2,350 participants of the VIB-KU Leuven Flemish Gut Flora Project population cohort.

The principal author said: 'We found systemic inflammation in participants carrying the Bact2 enterotype to be higher than expected based on their BMI. Even though this study design does not allow inferring causality, our analyses do suggest that gut bacteria play a role in the process of developing obesity-associated comorbidities by sustaining inflammation. While these key findings confirmed our study hypothesis, the results we obtained when comparing statin-treated and -untreated participants came as a total surprise.'

In obese individuals, the prevalence of the dysbiotic Bact2 enterotype was significantly lower in those taking statins (6%) than in their non-treated counterparts (19%) - comparable to levels observed in non-obese participants (4%). These striking observations were validated not only in the independent Flemish Gut Flora Project dataset, but also in an additional MetaCardis subset consisting of 280 patients with cardiovascular diseases.

The principal author: 'These results suggest statins could potentially modulate the harmful gut microbiota alterations sustaining inflammation in obesity. Several interpretations of our results remain possible. On one hand, by appeasing gut inflammation, statin therapy might contribute to a less hostile gut environment, allowing the development of a healthy microbiota. On the other hand, a direct impact of statins on bacterial growth has been previously demonstrated, which could possibly benefit non-inflammatory bacteria and underlie anti-inflammatory effects of statin therapy.'

For many years, microbiota modulation strategies have been revolving around dietary interventions, (next-generation) pro- and prebiotics, introducing or promoting growth of beneficial bacteria. Only recently, a revived interest in the effect of small molecules and drugs on the colon ecosystem appeared. This study will further fuel that momentum.

While promising, the findings reported are based on cross-sectional analyses, as opposed to following a treatment timeline. This means causality cannot be claimed based on these observations, nor can the researchers exclude that unaccounted factors could have played a role. For example, statin-medicated participants might have adopted a radically healthy lifestyle after being diagnosed with an increased risk of developing cardio-metabolic disease, which could have had a profound impact on their gut ecosystem. 'Thus', the researchers warn, 'while our results are definitely promising, they require further evaluation in a prospective clinical trial to ascertain whether the effect is reproducible in a randomized population, before considering the application of statins as microbiota-modulating therapeutics.'