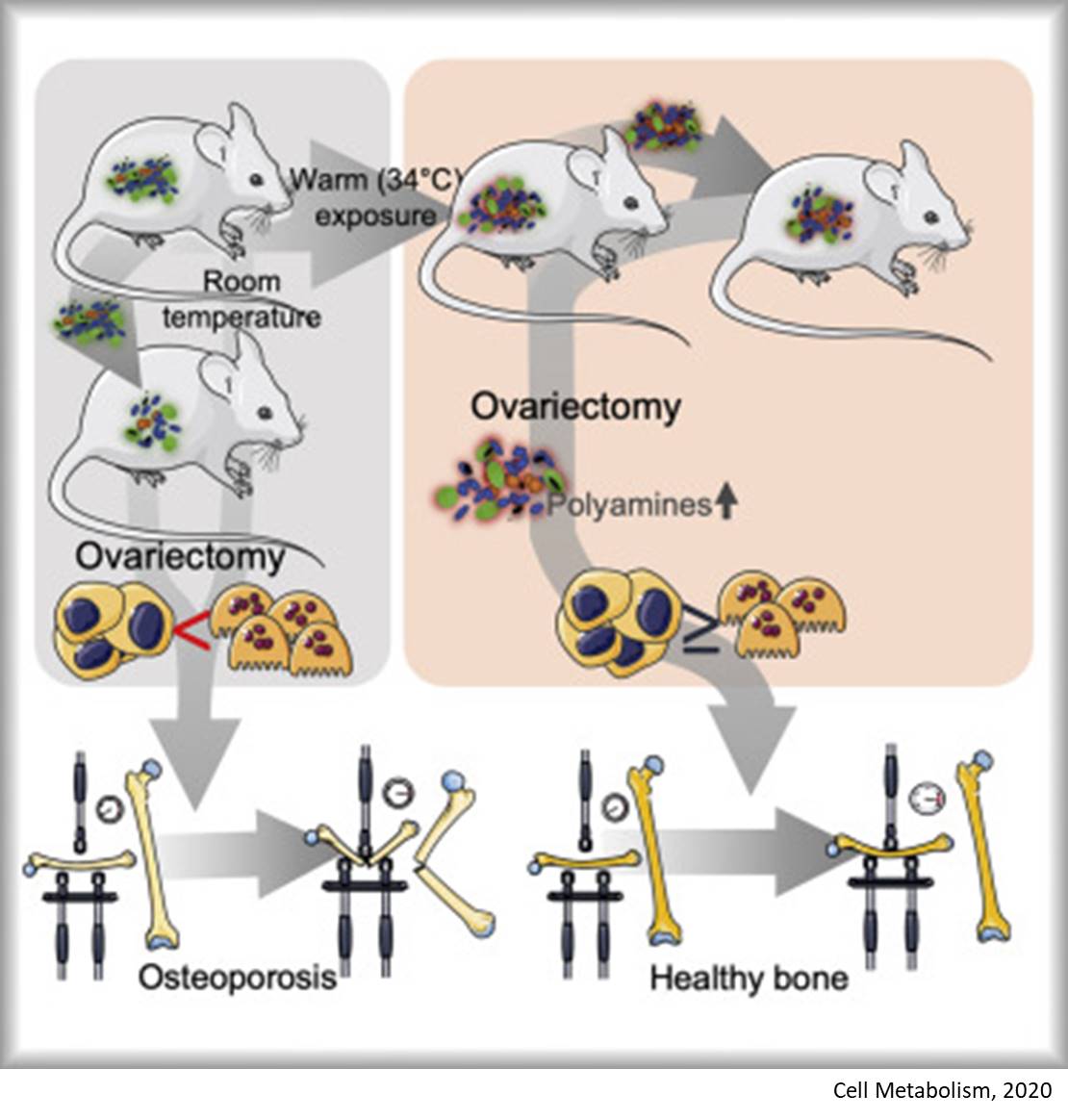 Osteoporosis, a bone disease linked to ageing, is characterised by a loss of bone density, micro-architectural deterioration of the bones and an increased risk of fractures. With one third of postmenopausal women affected, it is a major public health problem. Through epidemiological analyses, laboratory experiments and state-of-the-art metagenomic and metabolomics tools, a research team has observed that exposure to warmer ambient temperatures (34 °C) increases bone strength, while preventing the loss of bone density typical of osteoporosis. Moreover, this phenomenon, linked to a change in the composition of gut microbiota triggered by heat, could be replicated by transplanting the microbiota of mice living in a warm environment to mice suffering from osteoporosis. Indeed, after the transplant, their bones were stronger and denser. These results, to be discovered in Cell Metabolism, make it possible to imagine effective and innovative interventions for prevention and treatment of osteoporosis.

Many biologists are familiar with Allen's Rule, from 19th-century naturalist Joel Asaph Allen, according to which animals living in warm areas have a larger surface area in relation to their volume than animals living in colder environment. Indeed, a larger skin surface allows better evacuation of body heat. "In one experiment, we placed newborn mice at a temperature of 34 °C in order to minimise the heat shock associated with their birth. We found that they had longer and stronger bones, confirming that bone growth is affected by ambient temperature," the senior author of the study. But what about adulthood?

By placing several groups of adult mice in a warm environment, the scientists observed that while bone size remained unchanged, bone strength and density were largely improved. They then repeated their experiment with mice after an ovariectomy modelling post-menauposal osteoporosis. "The effect was very interesting", says the first author of this work. "The simple fact of warming the living environment of our mice protected them from the bone loss typical of osteoporosis!"

What about human beings? The research team analysed global epidemiological data on the incidence of osteoporosis in relation to the average temperature, latitude, calcium consumption and vitamin D levels. Interestingly, they found that the higher the temperature, the fewer hip fractures --one of the main consequences of osteoporosis-- regardless of other factors. "We found a clear correlation between geographical latitude and hip fractures, meaning that in the northern countries the incidence is higher compared to the warmer south", says the senior author. "Normalising the analysis of the known players such as vitamin D or calcium did not modify this correlation. However, when we excluded the temperature as the determinant, the correlation was lost. This is not to say that calcium or vitamin D do not play a role, either alone or in combination. However, the determining factor is heat -or lack thereof."

Specialists in the microbiota, the scientists wanted to understand its role in these metabolic modifications. To this end, they transplanted the microbiota of mice living in a 34° environment to osteoporotic mice, whose bone quality was rapidly improved. "These findings may imply an extension to Allen's rule, suggesting elongation-independent effects of the warmth, which predominantly favours bone density and strength during adulthood through microbiota alterations", says the senior author.

Thanks to the state-of-the-art metagenomic tools developed in their laboratory, the scientists then succeeded in understanding the role played by microbiota. When adapts to heat, it leads to a disruption in the synthesis and degradation of polyamines, molecules that are involved in ageing, and in particular in bone health. "With heat, the synthesis of polyamines increases, while their degradation is reduced. They thus affect the activity of osteoblasts (the cells that build bones) and reduce the number of osteoclasts (the cells that degrade bones). With age and menopause, the exquisite balance between the osteoclast and osteoblast activity is disrupted," explains the first author. "However, heat, by acting on the polyamines, which we found to be partly regulated by the microbiota, can maintain the balance between these two cell groups." These data therefore indicate that exposure to warmth could be a prevention strategy against osteoporosis.

The influence of microbiota on metabolism is being better understood. However, in order to be able to use this knowledge to develop therapeutic strategies, scientists must identify precisely the role of particular bacteria in particular diseases. In the context of their work on osteoporosis, the team has been able to identify certain important bacteria. "We still need to refine our analyses, but our relatively short-term goal would be to identify candidate bacteria, and develop several 'bacterial cocktails' to treat metabolic and bone disorders, such as osteoporosis, but also to improve insulin sensitivity, for example," the authors conclude.