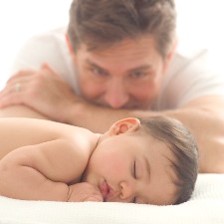 Temper tantrums and misbehavior, restlessness and inattention are the trappings of the typical toddler. But they may also be signs of developmental delays or disorders. Are infant sleep irregularities red flags for later developmental difficulties?

A study recently published in Developmental Neuropsychology finds a definite link between poor infant sleep and compromised attention and behavior at the toddler stage. The research discovered that one-year-olds who experienced fragmented sleep were more likely to have difficulties concentrating and to exhibit behavioral problems at three and four years of age.

The researchers used wristwatch-like devices to objectively determine sleep patterns at the age of one, and in the follow-up visits they used a computerized attention test, the Spatial-Stroop task, to assess attentional executive control. They also referred to parental reports to determine signs of behavioral problems.

"We don't know what the underlying causes are for the lower sleep quality and later behavior regulation problems in these children," said Prof. "There may be genetic or environmental causes adversely affecting both the children's sleep and their development in other domains. Our findings, however, support the importance of early diagnosis and treatment of sleep problems in infants and young children. Early interventions for infant sleep problems, very effective in improving sleep quality, could potentially improve later attention and behavior regulation."