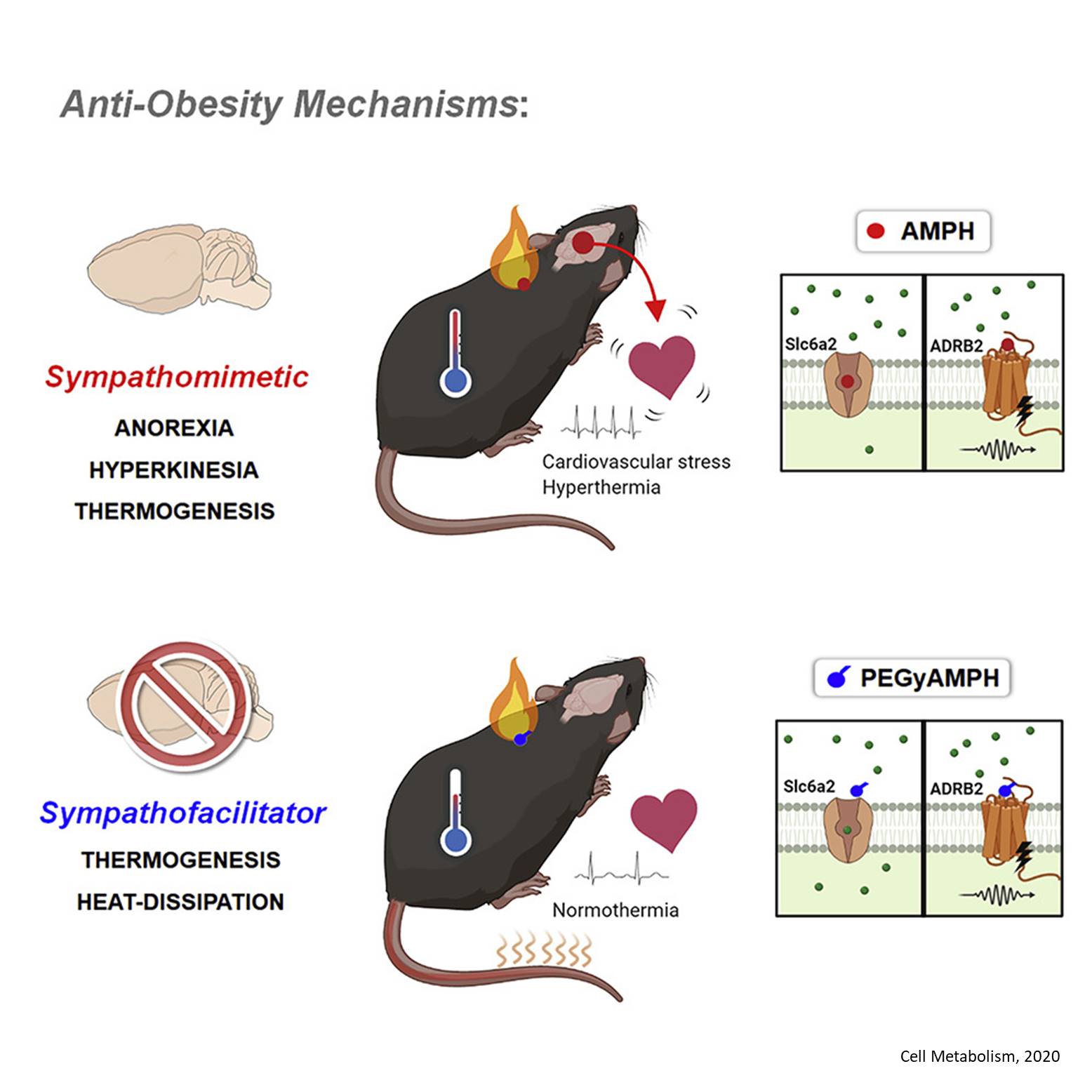 Historically, amphetamine-like drugs such as FDA-approved phentermine have been some of the most popular anti-obesity drugs that have ever been prescribed. They work in the brain by suppressing appetite but, besides being addictive, can also have dangerous side effects such as increased heart rate, hypertension and hyperthermia.

Despite being officially declared a chronic disease there are very few long-lasting and cost-effective treatments for obesity. Amphetamines are one of the few and they reportedly act in the brain to reduce appetite and increase locomotion or stamina. However, these drugs are also known for strongly activating the sympathetic nervous system, the peripheral part of the nervous system known to accelerate the heart rate, constrict blood vessels and raise blood pressure. Amphetamines are thus infamously coined as sympathomimetic.

"It was always thought that amphetamine's noxious effects on the cardiovascular system resulted from a their direct stimulation of the cardiac sympathetic nerves themselves, rather than from an central action in the brain, where we know it acts, for instance, to supress appetite", highlights the author, "despite the lack of experimental evidence favouring one mechanism over the other". However, the researchers suspected that the cardiac side effects of amphetamines could indeed originate in the brain. And if this was true, they imagined that if they could design a drug that did not pass the blood-brain barrier, they could avoid these unwanted outcomes, while perhaps retaining an anti-obesity action.

To test their hypothesis, they attached polyethylene glycol (PEG) polymer chains to amphetamine, in a process known as PEGylation. "PEGylation is often used to mask a drug from the body's immune system, or to increase the hydrodynamic size of molecules to alter their distribution in the body", explains another author. Through this process, they created a larger, PEGylated amphetamine, which they dubbed PEGyAMPH. Because of its larger size, PEGyAMPH cannot penetrate the blood-brain barrier and the team showed that it is indeed absent is the brains of mice treated with PEGyAMPH, which did not show suppressed feeding nor increased locomotion. This lack of behavioural effects was another confirmation that the PEGyAMPH did not indeed cross the blood-brain barrier.

The team then used different drug delivery routes to confirm that the cardiovascular effects of amphetamines are not caused peripherally but centrally instead, originating from the brain. Either compounds, if directly delivered onto the brain, induce cardiovascular side effects. Conversely, and unlike amphetamine, these noxious side effects are gone if the brain-sparing PEGyAMPH is delivered systemically.

They also found that the activation of peripheral sympathetic neurons, which receive signals from the brain, is required for centrally-acting amphetamines to be effective in stimulating lipolysis and promoting weight loss. "This means that the anti-obesity effect of an amphetamine treatment is not as effective in the absence of an intact sympathetic nervous system, despite its behavioural effects on appetite and locomotion", explains another author.

PEGyAMPH can still favour the activation of sympathetic neurons and increase peripheral sympathetic output onto adipose tissues. "And it does this in a different way of the unmodified amphetamine, namely by not entering the brain and by not binding to some of the well-known molecular targets of amphetamine", adds the senior author.

The researchers thus coined the compound as sympathofacilitator, to distinguish it from its chemical predecessor, the sympathomimetic class. They showed that the effect of PEGyAMPH is mainly mediated by the β2-adrenoceptor (ADRB2), which they show to facilitate the activation of peripheral sympathetic neurons. These neurons were previously shown by the team to make fat to burn if they are triggered by descending signals from the brain.

The researchers then demonstrated that PEGyAMPH protected mice against obesity despite the absence of behavioural effects, such us decreased appetite and increased locomotor activity. "It was extremely exciting when we saw that, while untreated mice readily store excess fat the ones receiving treatment resisted weight gain" stated the first author of this study.

PEGyAMPH increased sympathetic-stimulated fat breakdown in the body, via a cellular process named lipolysis. It also increased thermogenesis, the process of heat production, which burns calories stored in fat. Importantly, although PEGyAMPH raises thermogenesis, unlike unmodified amphetamines, it does not cause higher core body temperature, because they have different actions on peripheral vasculature and thus on thermoregulation. Amphetamine is a vasoconstrictor, whereas PEGyAMPH promotes vasodilation via smooth muscle relaxation (known to involve ADRB2), allowing for higher heat-dissipation which normalizes core body temperature. Thus, the novel drug functions as an energy sink, whereby generation of heat is directly coupled to its dissipation. The senior author adds "this is like turning on the heat and leaving the windows open during the winter: you'll see your gas bill go up!"

The newly designed drug has several advantages over traditional amphetamine treatments for weight loss. Because it does not pass the blood-brain barrier, PEGyAMPH is not addictive and it also does not affect cardiovascular function, thus avoiding the worrying side effects that amphetamines can cause. Moreover, it also improved blood glucose levels in mice by increasing sensitivity to insulin, thus preventing hyperinsulinemia, a condition that precedes the development of type 2 diabetes. Hence, PEGyAMPH reduces obesity with a size-effect comparable to that of AMPH, yet with a distinct mechanism in that it spares effects relating to brain action, overriding caloric intake by increasing energy expenditure.