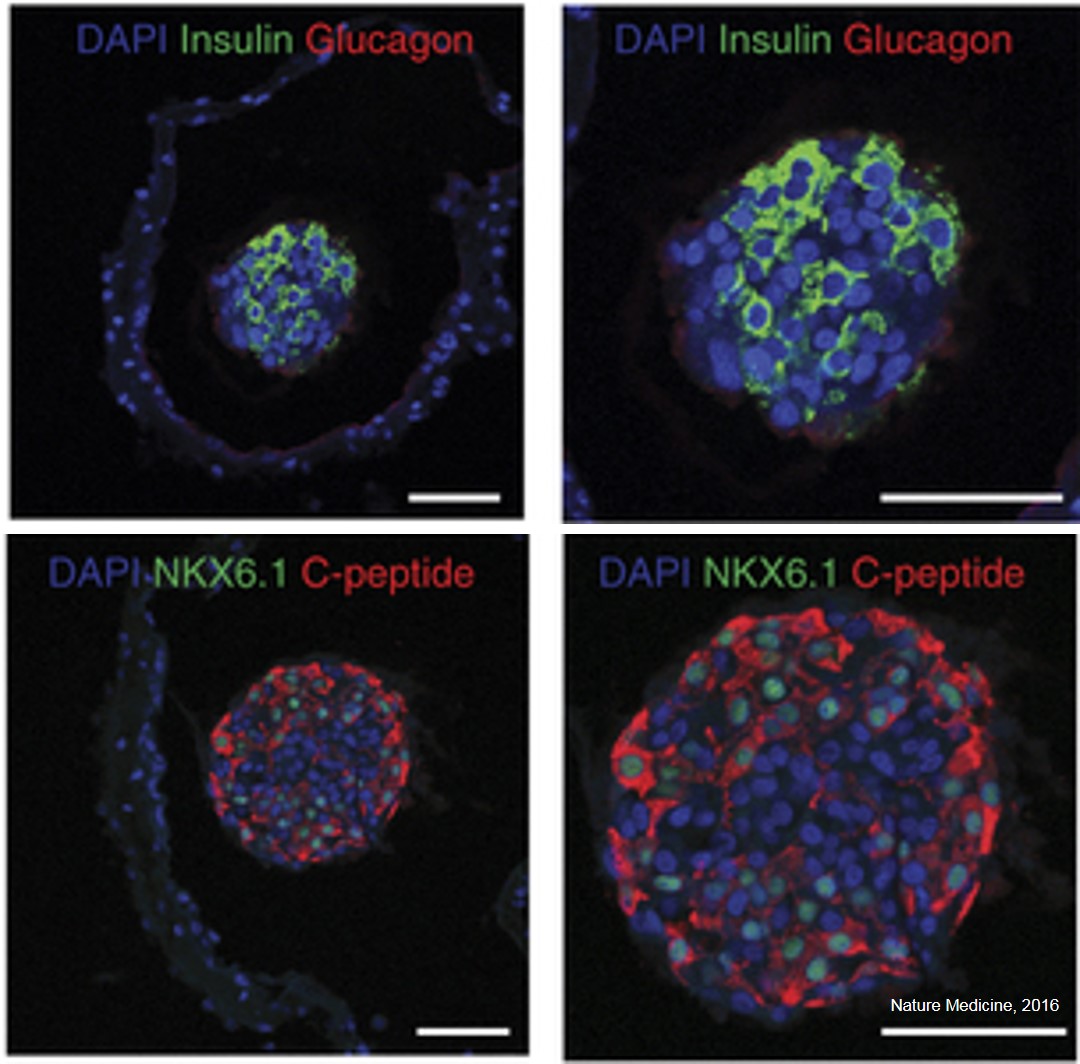 People with type 1 diabetes have an overactive immune system that destroys the insulin-producing islet cells in the pancreas. Lacking that hormone, the body fails to convert sugars to usable energy, and glucose rises to harmful levels in the blood without daily insulin injections. Islet cells have been successfully transplanted to treat type 1 diabetes, but those patients must take immunosuppressant drugs to keep their immune system from destroying the transplanted cells.

Previous research had shown that rodent islet cells could normalize blood sugar levels in animal models without immunosuppression if the cells were encased in hydrogel capsules. The semi-porous capsules allow insulin to escape into the blood, while preventing the host's immune system from attacking the foreign cells.

Larger capsules, about 1.5 millimeters across, even seemed able to avoid the buildup of scar tissue, which can choke off the cells' supply of oxygen and nutrients.

The new study used islet cells derived from human stem cells and capsules made of chemically-tweaked gel that are even more resistant to the build-up of scar tissue. They tested several varieties of chemically-modified alginate hydrogel spheres -- in various sizes -- to see if any excelled at resisting scar-tissue formation.

Researchers tested the spheres to ensure they would allow the islet cells to function inside a host. Using a special microfluidic device they delivered minute amounts of glucose into tiny wells containing encapsulated islet cells and measured the amount of insulin that seeped out. They implanted spheres that showed promise into rodents and non-human primates to look for the development of scar tissue.

They found (and reported in the journal Nature Biotechnology) that 1.5-millimeter spheres of triazole-thiomorphine dioxide (TMTD) alginate were best at allowing allowing insulin to escape while resisting immune response and the buildup of scar tissue.

When implanted into a mouse model of diabetes, TMTD-alginate spheres containing human islet cells were able to maintain proper blood glucose control for 174 days -- decades, in terms relative to the human lifespan.

"When we stopped the experiment and took the spheres out, they were virtually free of scar tissue," author said.

"While this is a very promising step towards an eventual cure for diabetes, a lot more testing is needed to ensure that the islet cells don't de-differentiate back toward their stem-cell states or become cancerous," said the author. If the cells did become cancerous, they could easily break through the spheres. Authors also cautioned that a cure for human diabetes would require scientists to develop techniques to grow large numbers of human islet cells from stem cells -- a worthy goal.