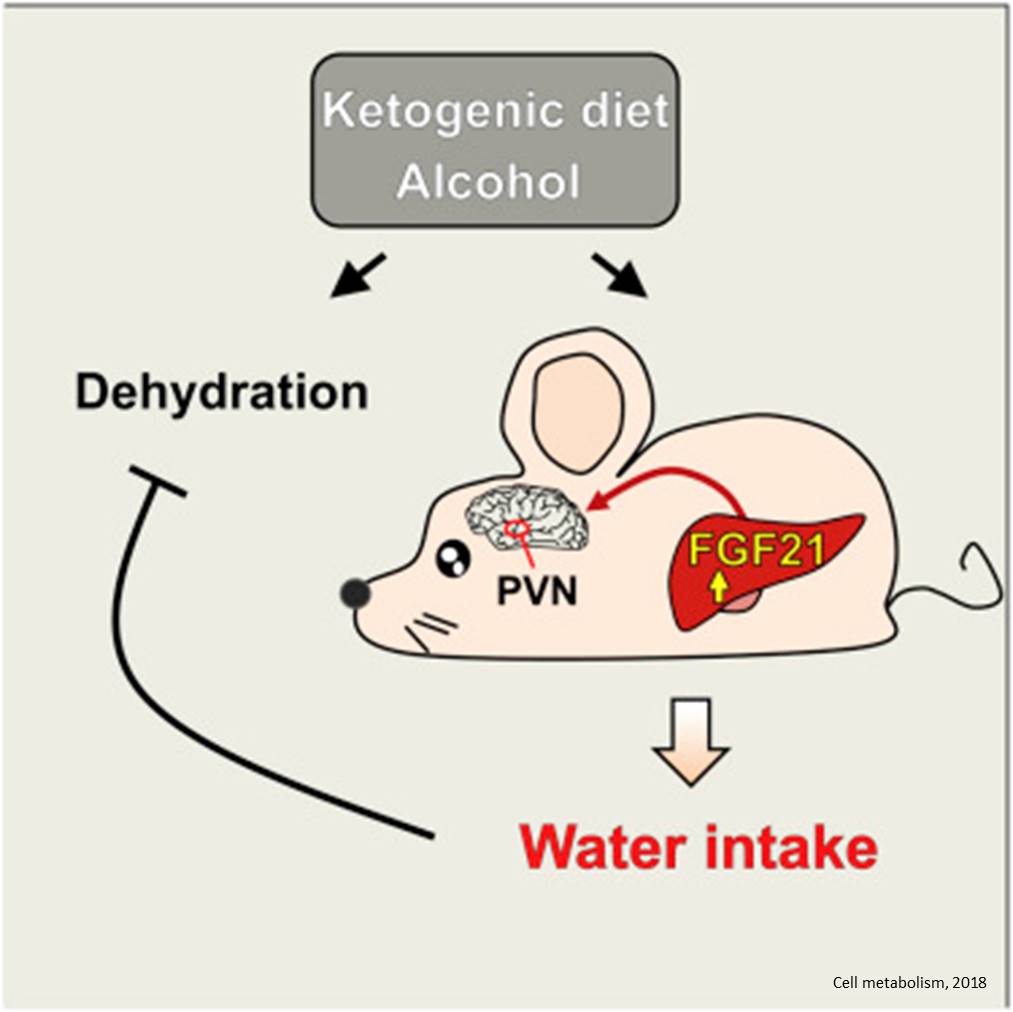 Why does drinking alcohol or consuming sugar make us thirsty? An international study of mice and humans in reveals an unexpected anti-dehydration mechanism.

In a study published in Cell Metabolism, researchers identify a hormone FGF21 that acts on the brain to increase the desire to drink water in response to specific nutrient stresses that can cause dehydration. In earlier research, they found that FGF21 acts via the brain's reward pathway in mice to suppress the desire for sugar and alcohol in favor of drinking water.

"We knew that exposure to alcohol or sugar turns on production of FGF21 in the liver. What we now show is that this hormone then travels in the blood to a specific part of the brain, the hypothalamus, to stimulate thirst, thereby preventing dehydration," said the author. "Unexpectedly, FGF21 works through a new pathway that is independent of the classical renin-angiotensin-aldosterone thirst pathway in the kidneys."

In mice, the study revealed, the hormone regulated hydration (water drinking) in response to nutrient stress. In one experiment, the researchers found that normal mice and mice genetically unable to produce FGF21 drank similar amounts of water when given the typical chow diet. However, a high-fat/low-carbohydrate ketogenic diet stimulated water drinking in normal mice while mice genetically unable to produce FGF21 failed to increase water intake in response to that nutritional stress. Those findings confirmed the hormone's role in the signaling pathway, the researchers said.

A second important finding in this study is the very strong response to the hormone in humans, author said.

In that part of the research, 21 study participants at the Medical University of Graz in Austria were randomly assigned to drink either a mixture of alcohol and juice, or juice alone. Hourly over four hours, researchers measured their FGF21 blood levels. In response to alcohol, FGF21 levels peaked at around two hours and fell after that.

"This suggests that FGF21 might someday be used as a drug to limit alcohol consumption and protect against its effects in people," said another author. "Those findings also suggest that FGF21 is regulated the same way in humans as in mice and that the process involves the expression and activation of certain proteins in the brain."

The FGF21-induced thirst response appears to depend on another signaling pathway in the hypothalmus, the β-adrenergic circuit, the researchers said.

"There are old studies from the 1970s suggesting that this pathway might regulate thirst. Our data suggest that FGF21 might work through that pathway as well," said the other author.

For a long time, feeding behavior has been emphasized in metabolic research rather than hydration. This study suggests a change may be on the table, the researchers said.

"To put this in context, we always look at food intake, and the metabolic field has spent comparatively little time studying water intake. This study suggests that we should think more about hydration and how it might contribute to metabolism," author said.