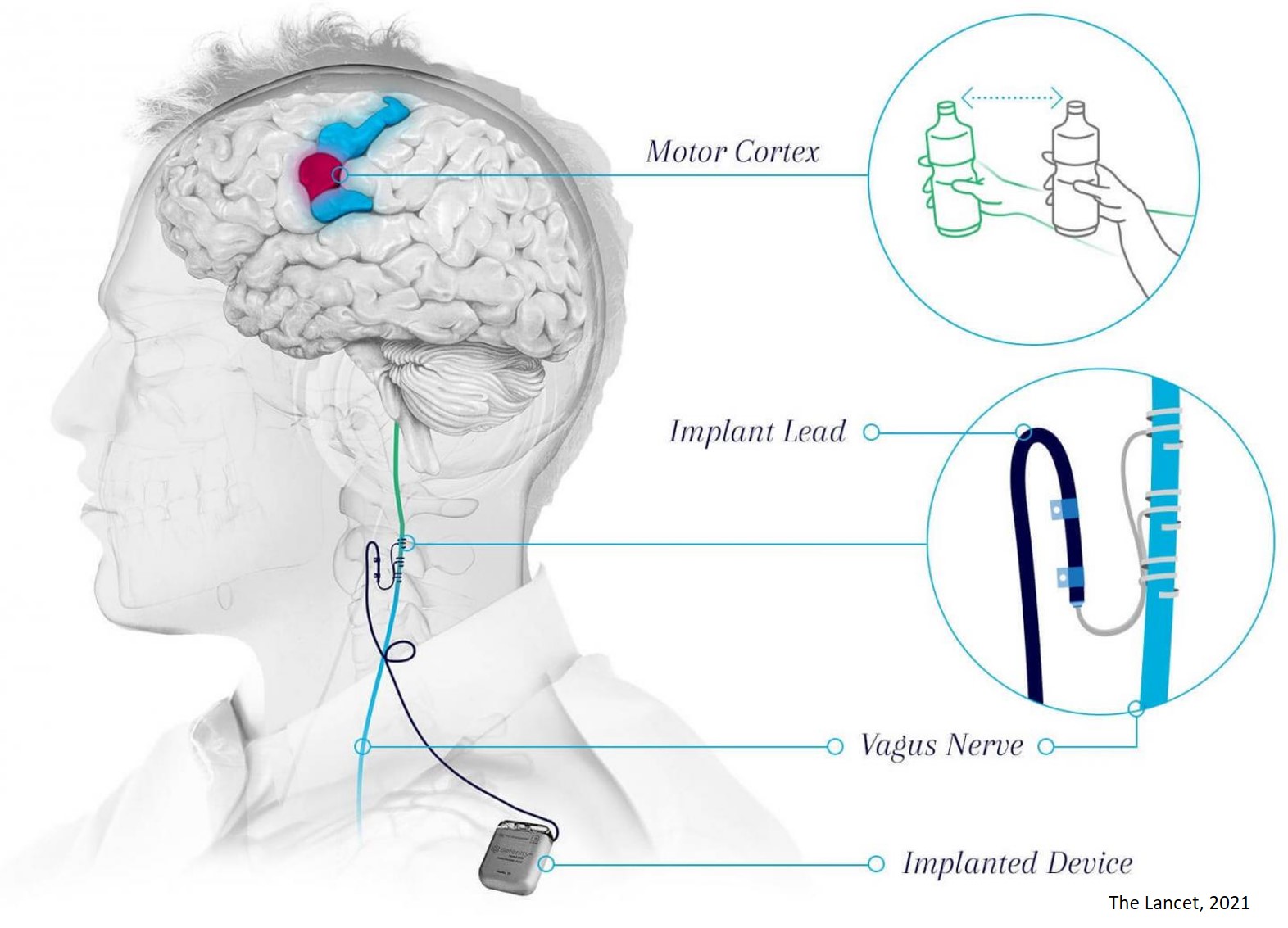 Every year, more than 795,000 people in the United States have a stroke. Of these, approximately 80% lose arm function and as many as 50-60% of this population still experience problems six months later.

Traditionally, stroke patients try to regain motor function through physical rehabilitation, where patients re-learn pre-stroke skills, such as eating motions and grasping. However, most patients eventually plateau and stop improving over time.

Now, results of a clinical trial published in The Lancet gives patients new hope in their recovery.

Patients who received a novel treatment that combines vagus nerve stimulation (VNS) and rehabilitation showed improvement in upper body motor impairment compared to those who received sham (inactive form of) stimulation and rehabilitation. Considered a natural antenna to the brain, the vagus nerve runs from the chest and abdomen to the brainstem and regulates many of the body's functions.

"This is incredibly exciting news for everyone involved in stroke rehabilitation and functional restoration and represents a unique intersection between neurosurgery and neurorehabilitation," said the lead author. "These study results are the first of their kind, and open up new possibilities for stroke patients, allowing them to reclaim more arm function even years after having a stroke."

In this international, multi-center clinical trial, 53 participants with moderate to severe arm weakness nine months to 10 years post-stroke, received rehabilitation paired with VNS. Fifty-five patients within the same parameters received a sham stimulation. The trial was randomized and triple blind.

Those receiving the nerve stimulation had a wire inserted into their neck that wrapped around the vagus nerve. The wire was then connected to a pulse generator device implanted in the chest. Those receiving the sham received placebo implants.

After the surgical procedure, all patients received six weeks of in-clinic therapy, which included tasks such as reaching and grasping, simulated eating and opening and closing containers. After the in-clinic period, patients continued treatment with a course of daily home therapy.

When the two patient groups were compared, those receiving the nerve stimulation scored higher on several standardized measures of upper arm functionality.

"Not only were the results clinically meaningful, the fact that these patients were at least nine months post-stroke and in some instances years out, points to the possibility that meaningful improvements can be achieved even years after a stroke," said the author.

The device is thought to work by triggering the release of brain neuromodulators - which regulate the body's responses - to strengthen motor circuits in the brain associated with movement, enabling the brain to effectively relearn tasks. VNS is already used widely for the treatment of epilepsy and plays an increasing role in the treatment of severe depression.

"For too long, stroke patients have faced limited options for recovery," said the author. "This new treatment signifies a breakthrough that could be life-changing for many stroke patients and also represents an approach that will certainly be explored for many other functional restoration applications in the future."